Day ten started a bit late for us. We are usually up and off quite early but we had to sort out the laundrette formally known as our campervan. We had clothes hung everywhere as they were not quite dry last night when the dryer had run out of time. After finding a home for everything we headed out of Odda to drive to Utne, described by Lonely Planet as one of the most picturesque villages in Hardangerfjord. The scenery is very different today as Hardangerford is famous fruit growing country so every spare meter seems to be filled with orchards or Christmas tree farms.

After a little wander around Utne we continued around the coast following the Hardangervidda Tourist Route stopping at an attraction on the map called Hereiane. It was only when we stopped that we realised the attraction was actually the public conveniences. It was quite an impressive structure built entirely from natural stone and sitting on a bright yellow plinth. It does seem unusual though to have a toilet marked on the map as an attraction. Our next stop in the region was Jordal. In the guidebook it raves about the waffles from the kiosk near the boat shed. I had promised Andy waffles for lunch after reading this. Unfortunately you have guessed it, we are out of season so it was closed. The good part about travelling at this time of year is that the roads are really quiet and we have had overnight spots to ourselves, but you cannot expect everything to be open. Disaster was diverted though by a local co-op selling cakes. 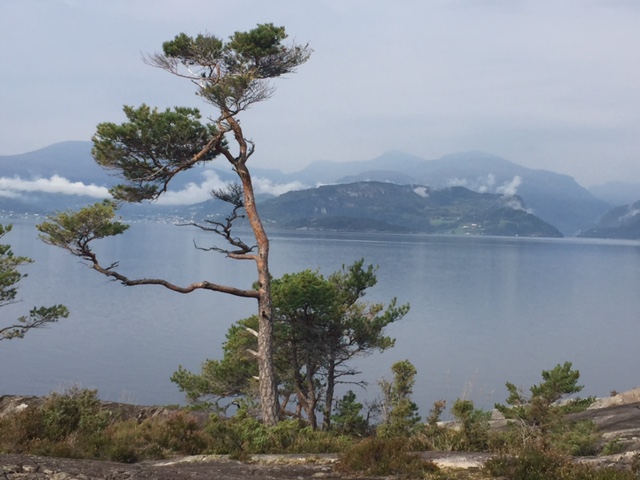 Next we got the ferry from Jordal to Torvikbygd. This is the longest ferry crossing we have done in Norway so it was little bit more expensive at 131K (£12.20). It was then on to Steinsdalsfossen, another waterfall. This one is slightly different as you can actually walk under the cascade, and you don’t really get too wet.

Next the plan was to head towards Bergen and find somewhere to stop not too far from the city so we could get in early tomorrow. That didn’t go quite to plan. Everywhere we found that looked OK was no camping, I think this was because we were going through a big ski area. Before we knew it we were in the city and it was starting to get dark. With a slight panic we headed to the waterfront where it looked like there was a lot parking areas. We came across a deadend that already had a couple of campers parked up and with the help of google translate worked out we could do 24 hours parking for 120k as it was free between 11pm and 8am. We could not see any no camping signs so decided to risk it. We had driven past a lovely food market with outdoor seating on the waterfront so we went straight out to see if we could find somewhere to eat. We found a nice place but they said we had to have Finn the other side of the rope guard, apparently she said that is the law. There was no way he was going to put up with that so we headed away from the front. Andy had seen a restaurant as we were walking down that he was sure there was a dog outside. It was a pizza place with checked table cloths, always a good sign! ( Only Stuart and Sarah will get this! ) They seemed OK about the dog as long as we paid inside and we did not have waiter service for the drinks. I have no idea what difference this makes but not a problem for us. The pizzas were lovely and we even treated ourselves to beers and a wine. This was our first meal out in Norway as we do not really stop overnight anywhere that we can eat out, plus we worked out if we did this every evening spending on average £150 a meal the holiday would probably cost us about £8000!

Weather – dull with rain showers in the morning, brightening up in the afternoon and getting warmer