Day twenty and we are at the half way point on our adventure. Last night the noise didn’t keep us awake and we left quite early before most of the people around us were even awake.  We headed south and our first stop was a lookout point for photos, early elevenses and a little walk around the headland, which ended up been more of a squelchy paddle. It was not only wet underfoot but it also started to rain mid walk so was a bit damp on top as well. 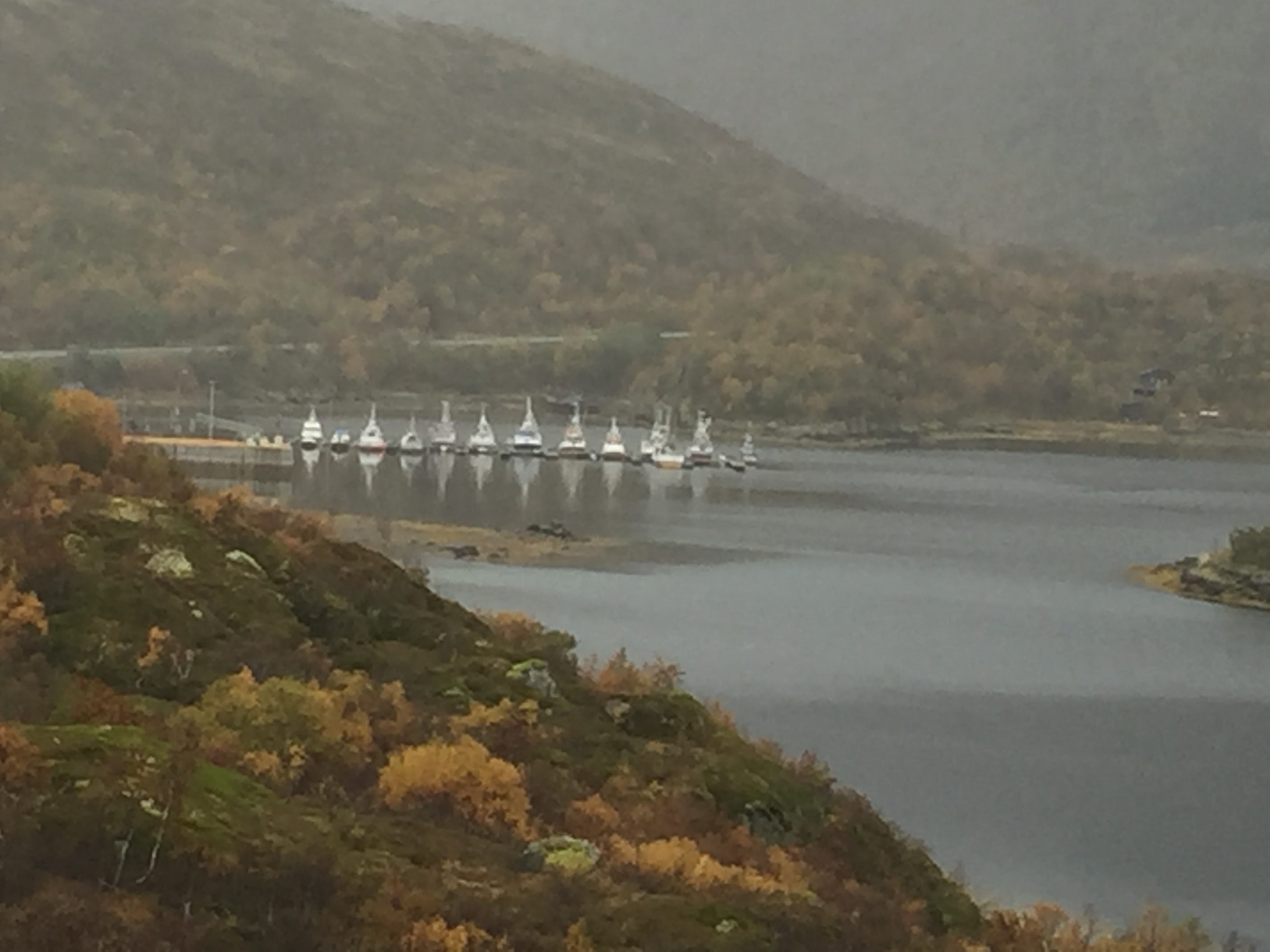 Getting around the islands is now very easy as most of them are connected by bridges, which themselves are quite amazing to look at, or by tunnels either through the mountains or under the water. 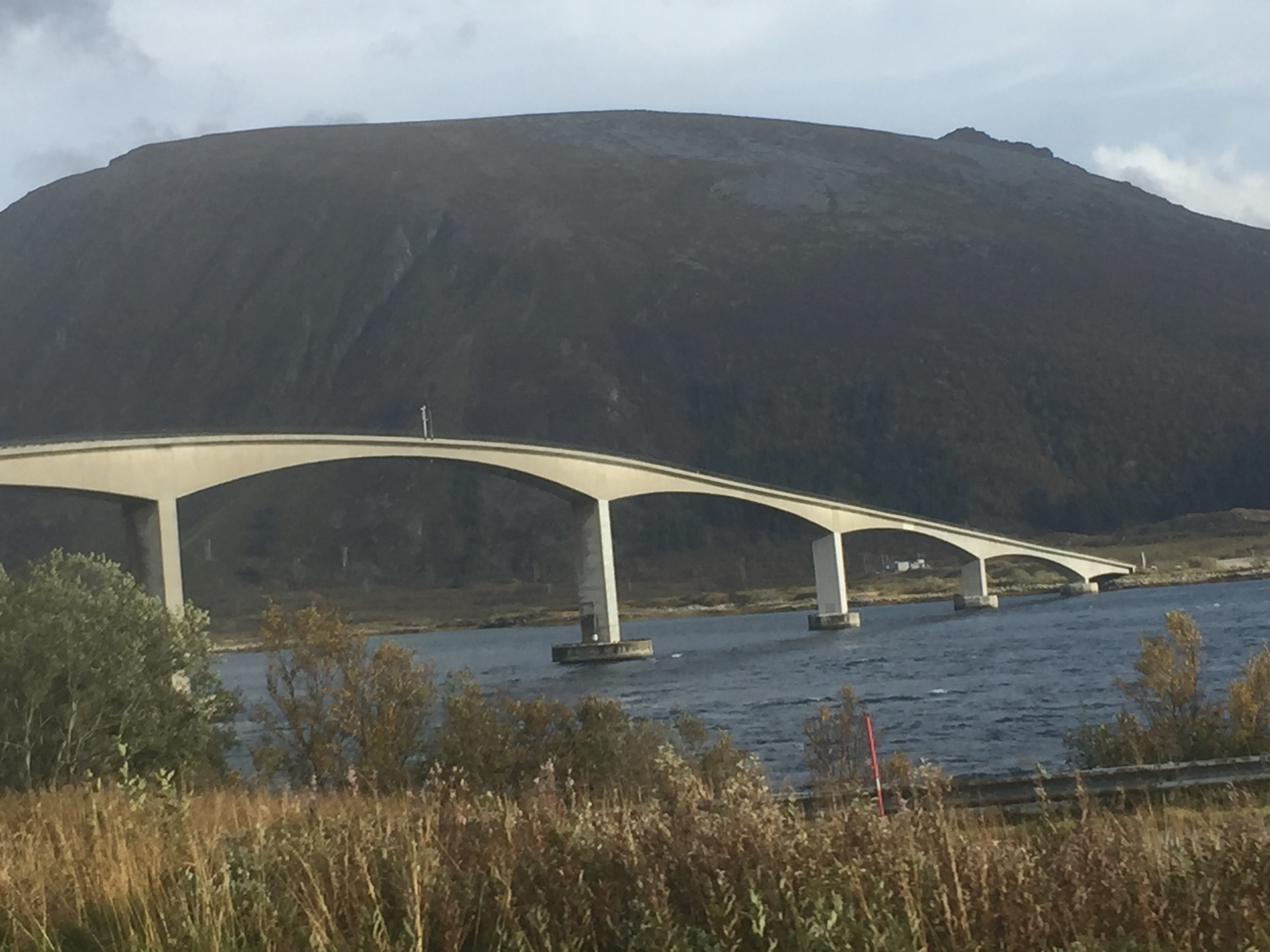 After drying out while we drove the next stretch, the sun then came out for us as and we stopped in Henningsvaer which is still an active fishing village, but definitely caters for the tourists as well. It was quiet this time of year, but it is the first place apart from Bergen where the cafes and shops are open with people in them. This gave us an excuse to stop at a café and get some takeaway cakes for dinner. Apparently the nickname for the village is ‘the Venice of Lofoten’ which is a bit of a exaggeration, but I do think it could be the Bourton-on-the-Water of the Lofoten Islands in summer. As you walk through the village and out to the exposed headland the other side there are hundreds of empty wooden racks where they air dry cod. They catch the cod through the winter and they stay hung on the racks curing in salty air until the summer. I am thankful that we were not visiting during the drying season as I have read that the stench can be quite over powering.

So with our cakes carefully stowed away we continued to Hauklandstranda (Haukland beach) which is a lovely white sandy beach surrounded by the mountains. On the way down to the beach it was a really narrow road and we had our first damage to the camper of the holiday, a workers van went past us at speed and clipped the wing mirror so we have lost the bottom back of it. More duck required, hopefully it will stay put until we get home. There were a few people having BBQ’s and walking on the beach when we arrived, but by the time we had done a section of the coastal path the car park was empty apart from three Norwegian motorhomes who had formed a circle and a tepee tent by the beach. A perfect quiet spot for the evening…… about an hour later as the sun started to set more cars started pulling into the car park. A group of girls got out, stripped down to bikinis and went for a swim in the sea. A few more people arrived with small tents, and another group of girls started stripping off and going for a very quick swim. I can’t imagine the water is very pleasant in September. It was then that it dawned on us that it was Saturday night, you tend to totally lose track of time when it doesn’t actually matter what day it is. This must be a happening weekend venue on the Lofoten Islands. What a great way to spend the evening, the campfires are now in full force and hopefully the party will not grow too big!! It is too late for us to move anywhere else as the bar is open in this campervan and it is pretty much zero tolerance to drink drive in Norway so we are staying put.

Finn is now fast asleep but he had a bit of a shock, literally, at the end of our walk. Andy and I were busy fastening the gate and Finn unfortunately either weed on the electric fence or caught his tail on it, neither of us actually saw it we just heard the squeals and him retreating swiftly licking his back end. There doesn’t appear to be any ill effects but he got extra treats with his dinner tonight to make him feel better and also to make us feel better for bad parenting.

Weather –  sunny start, following by rain then a sunny afternoon. High of 15 degrees.