Day thirty-four started cloudy with a cold wind. Andy is wearing shorts again due to our lack of success at finding a campsite.

From our overnight spot we headed to Risor, a pretty town with some historic houses around the marina dating from 1650 to 1890. We parked up on the hill above the marina where there were miles of German trenches, barracks and gun emplacements left from WW2.  It is now a lovely landscaped wooded walk with information boards telling you about the history.

We made our way down into the town and found a bakery which had tables outside. It was just about warm enough to sit and have a coffee and cake. This was a rare treat for us this holiday as we haven’t spent that much time in towns. We walked down to the marina where they had a boat sale event. There were some lovely boats which were all very expensive.

After a quick stop at Remo 1000 for supplies we headed along the coast to a campsite I had found on the internet that said it was open all year, although we had heard that one before!

On arrival at the Sorlandet Foriesenter four star resort we found that the reception was closed on a Saturday, there were some envelopes stuck on the door with names on and with keys inside for people who had booked cabins so they were definitely still trading. At this point while we were trying to translate other notices on the door Brad Pitt arrived on his quad bike. Well actually he was the maintenance man but he did look a lot like Brad Pitt. In great English he said ‘I don’t speak very good English please wait here’. He went off on his quad and came back with the cleaner and her young daughter. They opened up reception and with the daughter translating I managed to pay for a pitch and get a resort credit card loaded with 100NOK that activated the washing machine and dryers.  The reception is open between 9am and 10am tomorrow so we can get a refund on any unused credit. We were told we could park anywhere, there was plenty of choice as we are the only tourer on the site. It is a huge site, there are two swimming pools, a large restaurant, games room, TV room, crazy golf, tennis courts, beach volleyball all of which are closed now for the season. There was also a dog shower, Finn was pleased the water was turned off so no shower for him. 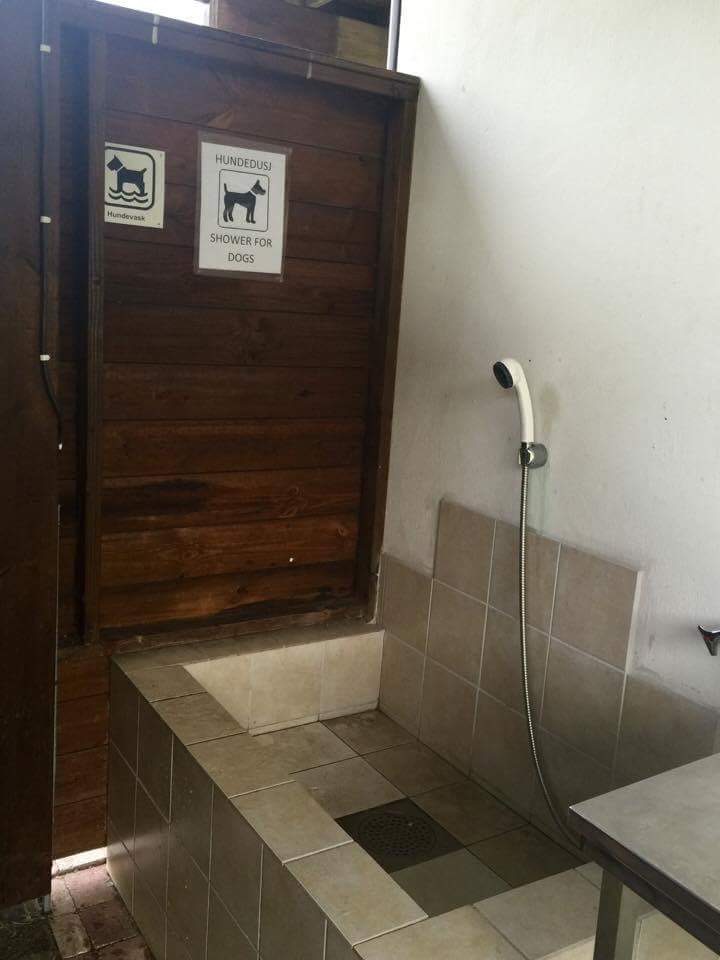 The site not only has cabins and tourers it also has hundreds of static caravans. In Norway they do not have the large static caravans that we have in the UK, instead they are large touring caravans that are permanently sited attached to an awning structure with a large decking area. You can see from the picture below the side view and then the huge deck area.

After selecting our spot with a sea view it was time to do the laundry. It is always a challenge to work out what setting we should put the machine on and it is always a guess. Everything came out the colour and size it went in so the setting seemed to be ok. Four hours later and everything that we need for the rest of the holiday was washed, dried and folded back in the wardrobe. Now it’s time for bed.

Weather – cloudy with a cold breeze