Day thirty-two started with everything frozen, including our water tank as it had been such a cold night outside. I am pleased to say we were all toasty inside the camper. As the water was frozen we headed off early for a warmer climate, basically going lower and into the sun. We headed through Rjukan, famous as a hydroelectric town and where the Telemark heroes in the war sabotaged the Germans making heavy water. The town runs along the valley floor so doesn’t get any sunlight at all, we found it rather a depressing place, I definitely couldn’t live anywhere that doesn’t see any sunlight. We headed out the other side to find some sunshine to leave the van parked in while we had a little walk. To help the de-frosting  Andy also chopped off a small piece of hose pipe to make a little funnel and tipped some hot water into the tank. This seemed to do the trick and by the time we finished our walk we were back in business.

Our next stop was to head to the summit of Gausta which is 1883m above sea Level. We did cheat slightly as we took the Gaustabanen Cable Railway almost to the summit. The railway is dog friendly. The road up to the railway was quite icy and had a sign at the bottom saying unsuitable for long vehicles, it wasn’t long before we caught up a huge lorry towing a trailer, we assume he drives this road regularly. The Gaustabanen runs 860m deep into the core of Mt. Gausta and then you swap trains inside the mountain and the second one climbs an amazing 1040m alongside 3500 steps at a 49-degree angle. From the station at the top it is then 83m to climb to the summit. The railway was built in 1958 by NATO at a cost of 1 million US$ so it could access its radio tower in any weather. Pretty extravagant really. We were lucky it was a nice clear day so the views from the summit were breathtaking and apparently when clear you see one-sixth of Norway. We opted to take the train up and walk down as I thought that would be easier. I suppose alarm bells should have rung when the lady selling the tickets said to take it slow and steady on the way down. It was another ankle breaking rock path. There was an information board telling you why the path was non-existent, which is that during the last ice age the peak penetrated through the ice cap as a nunatak. Over thousands of years with continuous freezing and thawing the surface has broken up into thousands of loose rocks forming a ‘block field’ on the surface with quartzite below. It was a tricky descent which mountain goat Finn with his four wheel drive found easy but we found a little harder. 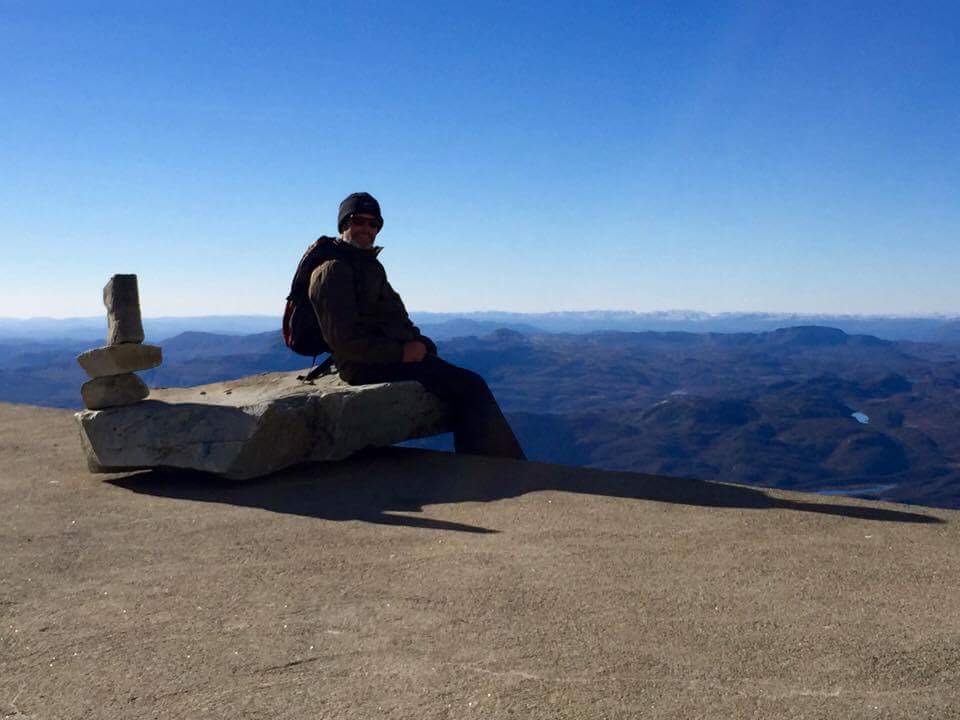 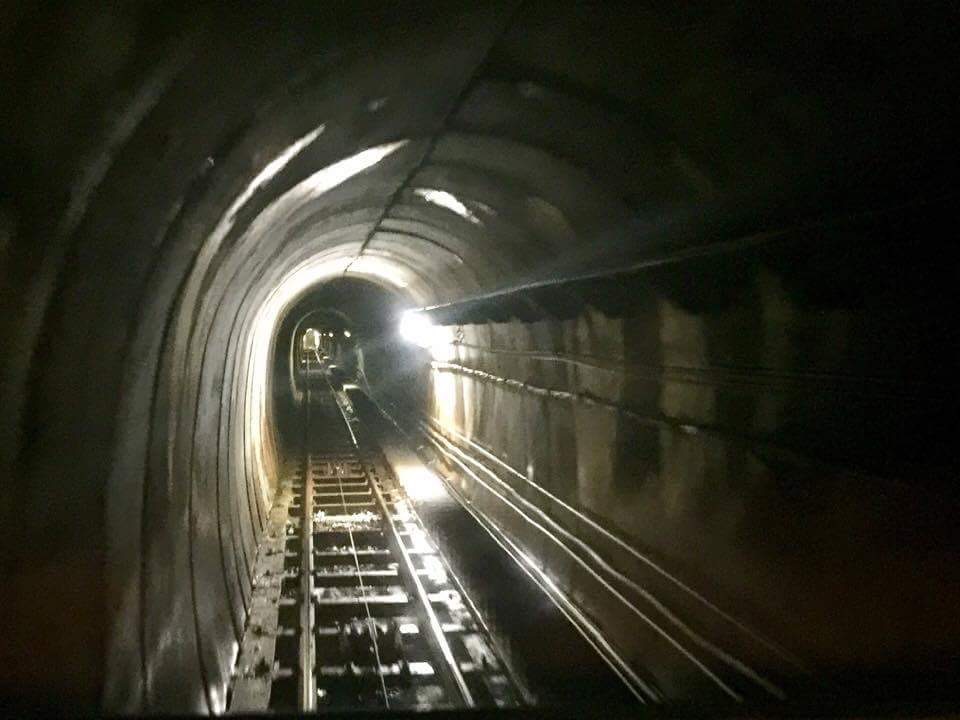 Next stop was to find a campsite for the night as the laundry situation really is quite desperate. After about twenty minutes driving south we found a small village with a shop/cafe and a campsite. It was lovely and sunny and we were lured towards the cafe by a couple coming out with huge ice creams. Five minutes later we were eating our own ice creams. We then headed to the campsite next door and I filled in all the paperwork, sorted out tokens for the washing machine and finally went to pay. It was at this point it all went wrong, I eventually understood she was saying cash only. The next bit of not so good news, the nearest cash machine was 22km away. So close but so far, we were back on the road again.

About ten minutes down the road the guidebook highlighted we were passing the largest stave church in Norway, so even though time was getting on it seemed rude not to pull in and have a walk around. I thought we may even be able to stop in the car park but no such luck, no campers between midnight and 6am. The church is one of only 28 stave churches remaining in Norway and was constructed around 18 Norwegian pine pillars and parts of the church date back to 1147. It was quite fairy-tale like in appearance. 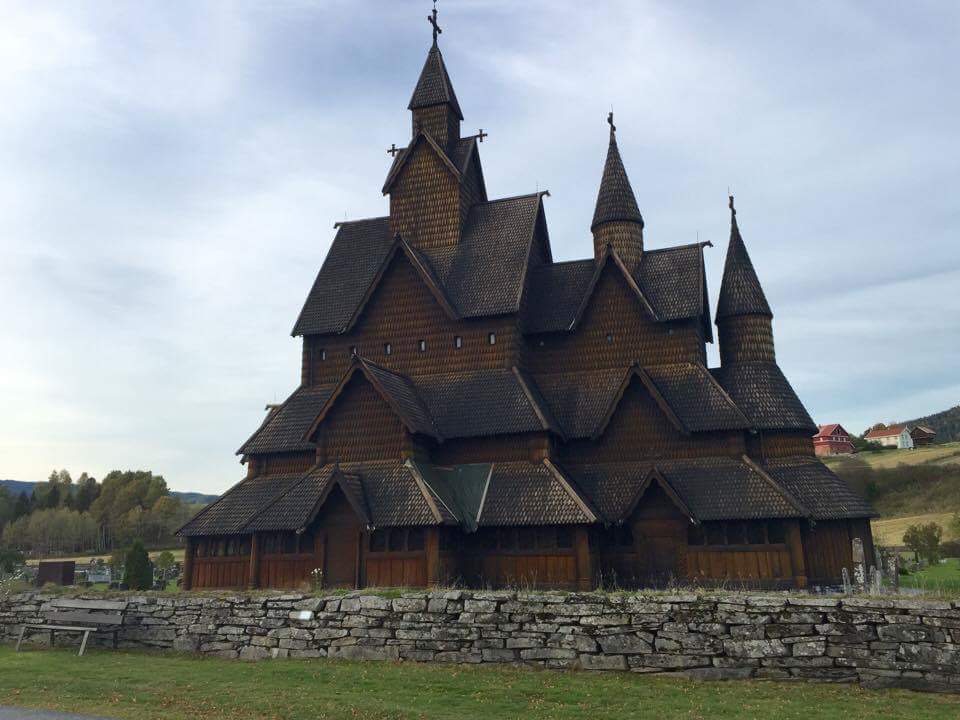 After a walk round we continued to head south hoping to find a campsite or stopover as it was about six thirty by now. We were in luck in the next town as we saw some campers parked at the marina and found a dedicated motor home parking spot that had electric pitches for the same prices as non electric, a bargain at 150K (£14). We popped our money in the envelope and set up camp for the evening just as it was getting dark and there was an amazing sunset over the water just for us. The laundry will have to wait until another day….. 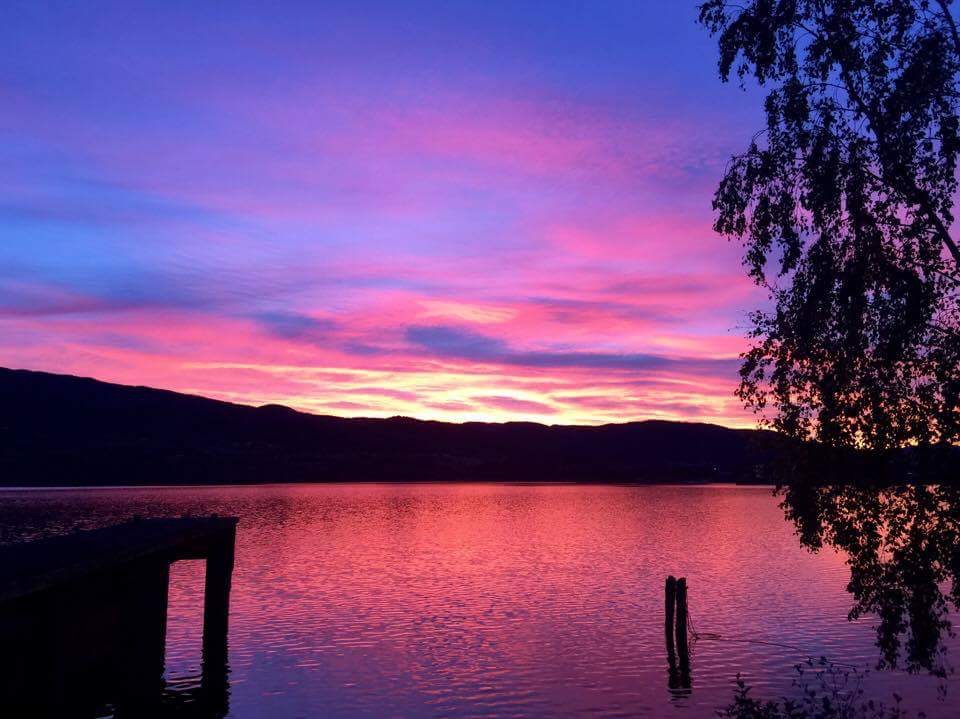 Weather – sunny and warm after a chilly start